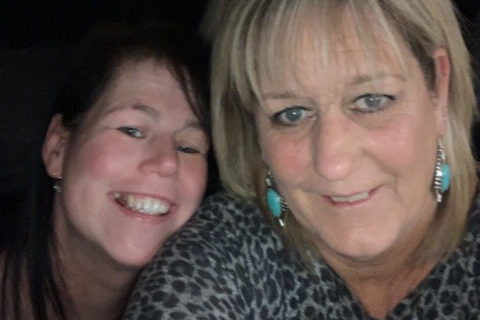 Meet Jessie and her mother Sallie. They live in Germantown, MD. Jessie has been receiving services from Opportunities, Inc. since 2015.

Jessie is social, upbeat and loves to dance. In fact, when asking Jessie what her favorite thing to do while receiving services from Opp, Inc. she responds with “ZamDance and shopping at Walmart!” Jessie thrives on being with others, and although she is enjoying being home with Mom during the quarantine, both Jessie and Sallie understand the importance of connection for Jessie. 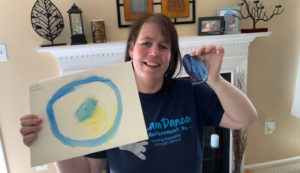 Jessie can’t wait for Mondays, when she’s with Opportunities, Inc.’s Art Therapy Intern, Lisa. Lisa created and dropped off a special art kit filled with materials for Jessie just after OppInc had to close our building and they have been working together on projects ever since via FaceTime. Sallie is so impressed by Lisa’s ability to organize and label all the art materials, “she really is amazing!” Jessie calls her art work and time spent connecting with Lisa on FaceTime “beautiful” and enjoys that they do art together. “I love it!” Jessie exclaims.

Another way Jessie has found connection during this time is her daily phone calls with Opp, Inc. Pre-Employment Specialist, Nelma. Jessie shared that she talks to Nelma every day. One day Nelma was driving through Jessie’s neighborhood and pulled over. They spoke on the phone and waved to each other.

“I love Nelma a lot,” states Jessie, “I miss going out with her to Walmart, the Airplane Park and out to lunch.”

We miss you too, Jessie!

When asking what Jessie has been doing during the day, she and Sallie share that Jessie has been eating her favorite foods, which includes chocolate chip muffins and doing an exercise video almost daily. Jessie gets fresh air on nice days by sitting on her back deck. While Jessie and Sallie live right by a lake with a walking trail, Sallie explains that Jessie still wants to hug the neighbors and friends they run into, which makes being outside more difficult.

Jessie participated in Opp, Inc. pilot Zoom session where participants created art and played an employment game. Jessie loved seeing so many of her friends – both peers and staff. Sallie stated that:

“Jessie needs something other than meals, naps and exercise. The fact that people could connect on zoom and see each other is a big deal. They were really excited.” Sallie said she is “looking forward to more Zoom classes because connection is so important.”

Sallie is a Registered School Nurse and has a medical clearance to be able to stay home with Jessie. She said that others in her position have been relocated to work at homeless shelters and prisons among other sites during this time. Sallie is thankful that she is able to be home with her daughter and connect with her other children and grandchild via phone.

When asked how Jessie will feel when Opp, Inc. re-opens. Jessie just says one word,